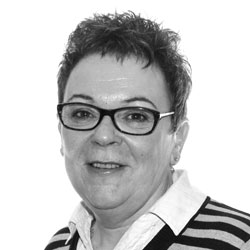 Rose is too old to remember her childhood dream but did apply for a hairdresser’s apprenticeship which after dropping the guard from the razor whilst cutting her husband’s hair on a couple of occasions was perhaps never going to be her destiny.

Hence after leaving school in 1975 Rose started her working life at Batchelors Foods joining as an office junior. Quickly moving into the Accounts Department as a Sales Ledger Clerk and stayed chasing payment of peas and soups for 10 years.

Here Rose had a career break to raise her two daughters until returning to work in 1997 as a bookkeeper for a Financial Advisor. In 2007 saw an advert for the Sheffield Chamber and as the saying goes the rest is history. After many changes in the Accounts structure within the Chamber Rose was promoted to finance Manager in May 2017 meeting the unique challenges of a Membership Organisation.

Rose enjoys socialising with friends and can be seen at her local public house (she feels lucky to still have one) most Saturdays. Loves holidays favourite destination Goa India.