Results from the first major business survey for 2021 by the BCC on Brexit found that half (49%) of exporters are facing  difficulties in adapting to the changes in the trade of goods following the UK-EU Trade and Cooperation Agreement .

Fieldwork for the survey, which received 1,000 responses, mainly from SMEs, was carried out between 18 and 31 January 2021. Nearly half (47%) of respondents? exported goods or services.

The survey found that:

When asked about the specific difficulties businesses were facing, commonly cited concerns included increased administration, costs, delays, and confusion about what rules to follow.

The BCC will continue to support UK businesses through its trade documentation services and Chamber Customs, a customs advisory, training and brokerage service delivered through Chambers of Commerce across the UK, and by working closely with the government.

The leading business group is calling on the UK Government, and where necessary with EU partners, to:

“Trading businesses – and the UK’s chances at a strong economic recovery – are being hit hard by changes at the border.

“The late agreement of a UK-EU trade deal left businesses in the dark on the detail right until the last minute, so it’s unsurprising to see that so many businesses are now experiencing practical difficulties on the ground as the new arrangements go live.

“For some firms these concerns are existential, and go well beyond mere ‘teething problems’. It should not be the case that companies simply have to give up on selling their goods and services into the EU. Ministers must do everything they can to fix the problems that are within the UK’s own control, and increase their outreach to EU counterparts to solve the knotty issues that are stifling trade in both directions.

“This situation could get worse if the UK sticks to its guns and introduces additional SPS checks in April and full customs checks on imports in July. These timescales need to change – and the support available for businesses who are battling to adapt to new trading conditions significantly increased.”

Commenting on what this means for businesses on the ground, BCC Director of Trade Facilitation and ChamberCustoms Liam Smyth said:

“First, difficulties arising from the challenges adjusting to the new arrangements, such as the sheer volume of paperwork and significant new costs of adjusting to those.

“Second, issues about how new rules have been implemented, such as new customs arrangements.

“Third, core provisions of the TCA which are currently of significant concern to businesses, such as on Rules of Origin and VAT.

“Taken together, and on top of decreased revenue and cash flow as a result of the pandemic, this is a difficult moment for exporters. Some tell us they will respond to the challenges by switching away from international trade or by moving their operations overseas.

“The Government needs to respond to this risk by giving firms tax credits to help with their ongoing adjustment and leaving no stone unturned in educating businesses and removing every barrier they can.”

Specific issues raised by businesses in the survey

Chris Black, Managing Director of Sound Leisure, a UK manufacturing firm based in Yorkshire, highlighted some of the difficulties that businesses across the UK are facing trading across borders post-Brexit:

“As a business that exports 65 - 75% of everything that we manufacture and the EU being a big part of that, we are concerned about tariffs, additional paperwork, and delays at the borders.

“Only last week we attempted to ship some machines to Spain and were advised by the freight forwarder to store the machine here for a few more weeks whilst everything calmed down. There is a long way to go before we fully understand what the new normal is.

“We are in the perfect storm following the pandemic, where supply chains were hit hard, container ships are all out of position – in general shipping worldwide is a nightmare.”

Jonathan Kemp, Managing Director of a manufacturing company AEV Group Limited, based in Merseyside with a plant in Hungary, said:

“We export to every continent in the world and have done for a period of time, therefore we have employees who are experienced in dealing with exports.  The issue with the EU-UK situation is the lack of clarity and preparedness in all areas.

“There is no support from government to fund delays or extra stock-holding required to deal with the delays or to assist in extra charges incurred by us or our customers.  We have another manufacturing site in Hungary (within the EU) and we are being asked by European customers to move production to this site because they don't want any extra paperwork or costs (even if just cashflow from paying VAT). Our current view is that we will reduce our operation in the UK and invest in EU facilities.”

The increase in paperwork to fill in was an issue for Shropshire Chamber of Commerce member and  kitchenware company,?Netherton Foundry

“Increased documentation [means that we] need to use higher paid staff to complete shipping details. Loss of orders due to new duty/customs arrangements; time (and therefore money) spent resolving European customers enquiries; cost of implementing new shipping arrangements and delivery charges on our website. A small business like ours does not have the resources to deal with all the extra work. 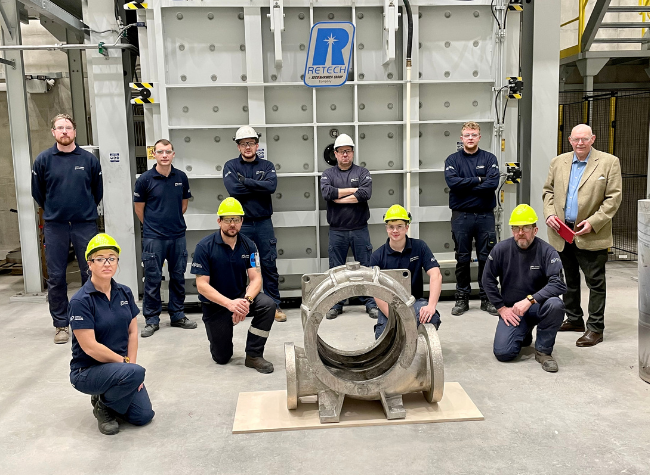 Probably the largest titanium casting ever poured into a ceramic shell

Castings Technology International (Cti) has recently produced the largest single component ever cast by the company in Commercially Pure titanium and probably the largest titanium part poured into a ceramic mould.