Fun-loving polar bear Flocke and her three cubs have been a big hit this summer holidays and were again charming the bank holiday crowds at the award-winning Yorkshire Wildlife Park this weekend. 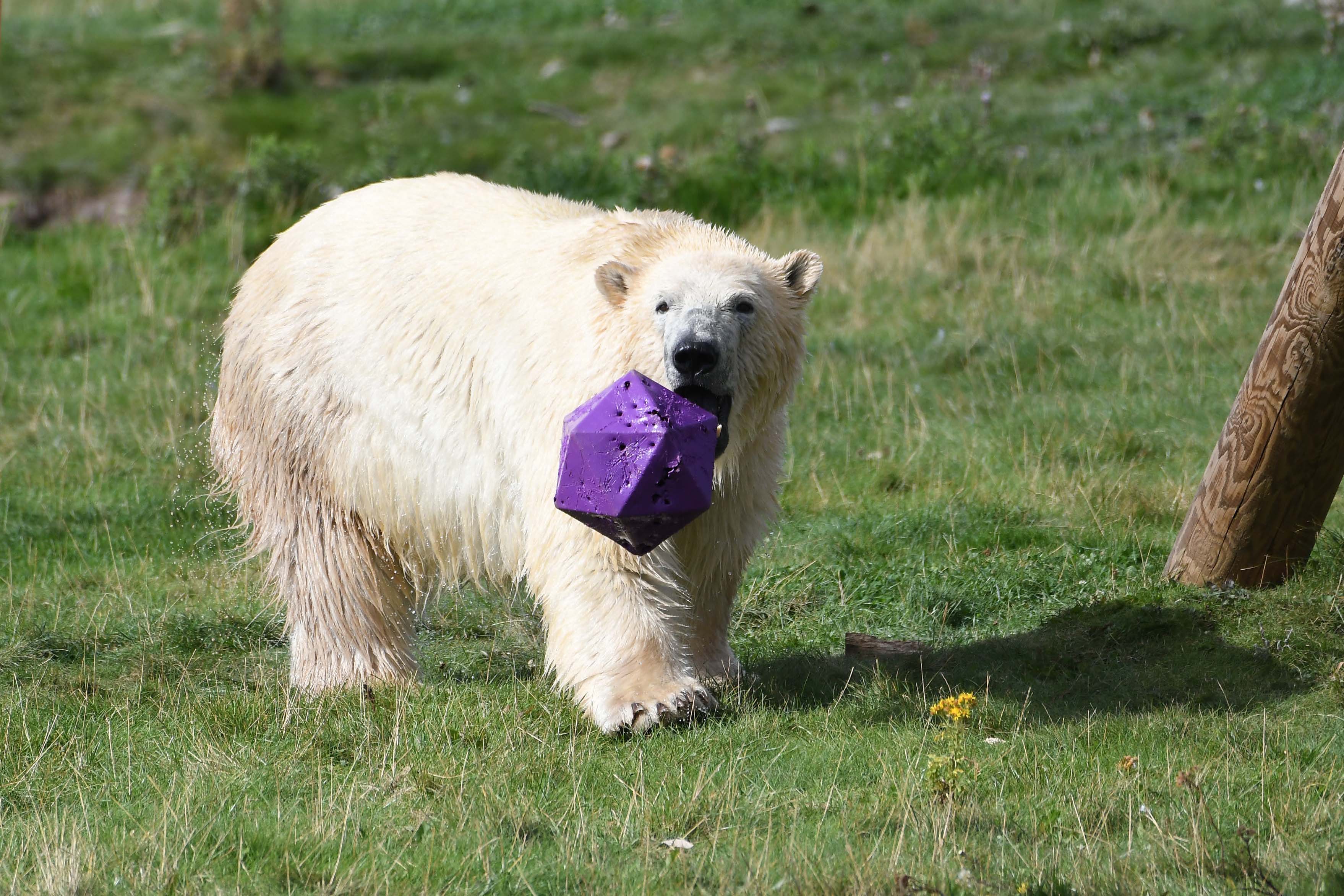 The family who arrived earlier this year have been settling into the four acre Project Polar 2 reserve. Meanwhile, on the other side of the Park in the original ten-acre Project Polar reserve, bachelor boys Luka, Nobby, Sisu and Hamish have been making the most of their lakes and caves. Yorkshire Wildlife Park is now the second largest polar bear facility in the world and the largest outside Canada.

Flocke and her three cubs, Yuma, Indiana and Tala have settled in well after their move from a park in the south of France as recommended by the European breeding programme.

“We’ve had them here with us since they arrived in June and we’ve seen a massive change in their behaviour during that time.

“When they first arrived here they were quite anxious. The cubs stayed very close to mum. Now they’ve relaxed a lot more and mum is willing to let the cubs go a little further afield.

“She’s taking full advantage of that ‘me time.' She has been kicking back and relaxing, keeping a watchful eye.

“We’re looking forward to a really interesting two years or so as the family grows up. The boys are getting really big and Flo will decide at some point that she doesn’t want babies around anymore so they will be crate trained so we can move them to Project Polar to be with our other males in the bachelor pad!

“Tala, the little female, is a bit different, as long as Mum tolerates her they can stay together. Visitors can’t get enough of Flo and her cubs. We can’t thank them enough for their support of the park this summer.”

The park, at Branton, near Doncaster, is a major force in the international campaign to save the species in the wild.

"YWP is absolutely committed to helping wild polar bears. We do this not only through education here at the park but also by engaging visitors in how wonderful polar bears are and fund raising for research and conservation projects financed by the Yorkshire Wildlife Park Foundation.”

Polar bears are the largest land carnivore and are listed as vulnerable on the International Union for Conservation of Nature’s Red List of Threatened Species, due to climate change that is causing loss of sea ice which restricts their ability to find food.

The Yorkshire Wildlife Park Foundation (YWPF) raises funds to support polar bear conservation in the wild and collaborates with Polar Bears International on a number of projects including one researching the impacts of denning polar bear mothers in the wild.

“Polar bear mothers in the wild have a hard time – impacted by oil and gas exploration but most of all by climate change and the loss of sea ice in the Arctic,” said YWPF Trustee Cheryl Williams.

“Working together with YWP, the Foundation will continue to work to conserve polar bears and inspire people to care about them and the Arctic. Let’s hope that having seen Flocke and her Family at YWP inspires people to support bears in the wild who face so many challenges and raise awareness to effect change in governments for action for climate change.”

The park has also welcomed other new arrivals  this year including a pair of Lowland Tapir, Maned Wolves and a pack of Bush Dogs at Atlantic Forest and a family of Californian sea lions at the new Point Lobos. It has all changed too with new restaurants and retail at the new visitor entrance.

YWP staff were also delighted to welcome back the popular WildLive Safari Nights concerts this summer with the last concert of the series taking place on Saturday (28th August) which featured Welsh superstar Katherine Jenkins.

Yorkshire Wildlife Park has over 5km of visitor paths around its 175-acres and brings visitors almost face to face with some of the world’s most beautiful and endangered species.